Follow these links to the amusing snippets of your choice....or read the quotes from One-Shot and Short Term games on this page...

"Oh, jeez, now their screwed..." "Nah, they were screwed before, this just adds variety to the screw..." (Referring to my reading of some interesting Wing Commander info just prior to the next run...heh heh heh)

"What the hell?!? I do NOT see the flaw Dark Messiah anywhere on my character sheet!!" (Are you sure...?)

"Its a redhead, and its fruit." (All the reasons you need to perform criminal acts on a military vessel.)

(After spending 3 DAYS trying to steal a crate of fruit scheduled to be offloaded to a military base, then looking at the main manifest...) "There is STILL...FRUIT...ON the Warlock." (Repeat as necessary.)

"Your death will be slow and Painful..." "Will I be locked in a room with you?" I shall stomp upon you, The stomping shall be swift, The stomping shall be painful, and I will show no mercy in all of my stomping. AMEN!" (A little altercation about who revealed the illegal poker game to the officers...ah, its a buddy film, I love it!)

"Oh yeah, he just happened to key in the 12 digit prime number PIN to access the secure files by smashing his face into the keypad." "It's possible." (Does the word 'no' have any meaning for you?)

"That was the WRONG pronoun..." (Referring to the quote below.)

"Yes, sir, ma'am, thing...." (Let's just say that none of these were appropriate to the superior in question, and that Spaceman Frost learned what its like to get hit by a ton of armored lizard. Ooops.)

"Why did you feel the need to bring an automatic assault system to dinner, Spacehand Lennox." "I would say insecurity, sir." "We suggest you get a blanket." (Are you sure that was insecurity...or inadequacy.)

"In the future marine, we suggest that you REACT." (To the marine KO'd by his own grav mace in the surprise phase of his first real combat.)

"Why the hell aren't you marines wearing armor?!" "It's not polite to wear combat armor to dinner." "But it's ok to bring a fully automatic assault system!?!" (Well, um, yeah.)

"But it's not my fault!" (Thank you Lando Calrissian - aren't you in the wrong universe?) 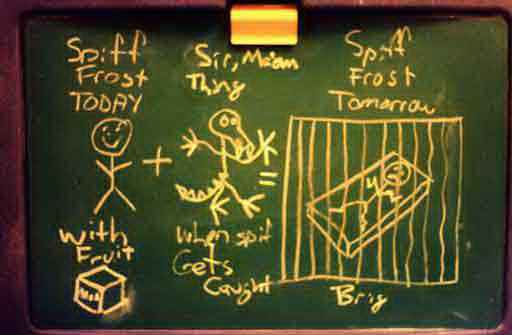 More Quotes to come as they are spoken.

Return to the Main page